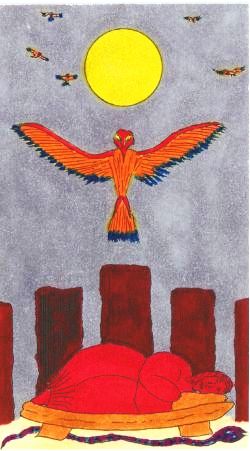 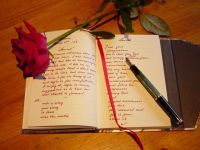 I am your
imagination
here to show you how
this energy pours from
your source in
abundance
like my luxuriant
head of hair.
I am your
unharnessed power
come from the
wilderness
to bring this
gift
to your awareness.
Take this
raw material and
give it form,
shape it
into a story,
your story
to share
with the world. 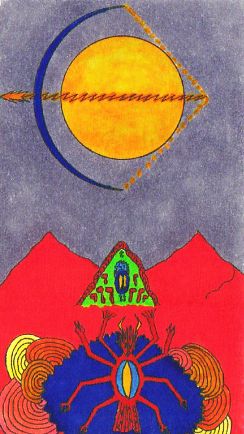 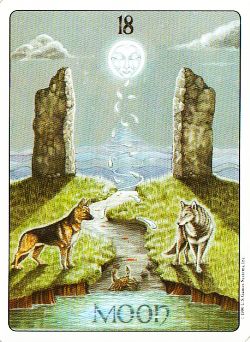 For more information about the Planetary Dream 2011
visit http://www.oniros.fr/dreams11.html

Gods and men are seated at a long table. Athena rises to her feet and addresses the meeting (I have the sense that I am the one acting this out).

I see a drawing. Small items are scattered on a white page but in the lower right part and commanding my attention is the torso of a woman, ending just below the waist. Brown locks fall around her shoulders; she wears a dark green dress. 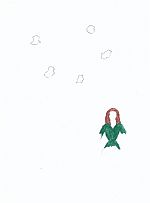 I am in the kitchen with my husband. He has put a small red pot on the stove, I hold in my hand two watery pieces of white fish, ready to put them in the pot. I become aware that I am wearing pyjamas (the ones I am sleeping in while dreaming) and my reddish brown bathrobe, but I don’t dwell on those details. I am thinking the red pot is too small, also it is not the one that we normally use for cooking fish, but I refrain from objecting.

I am moulding dark hair on a head that I hold close to my body. I feel fondness for this head.

I reach for an old fashioned black dial telephone by my bedside but stop short.

I see on a table in my father’s apartment two ashtrays filled with burnt out cigarette stubs.

My reflections on the dream

In Norse mythology, whenever a new order was called for the gods held council:

In my dream, gods and humans hold council together as cocreators of the civilized world. The dream gives the word to Athena but I have a sense of myself speaking. That the Owl is the attribute of Athena, Greek goddess of civilization, needs no explaining.

Curiously the scattered drawing foreshadows the fragmented dreams of the night, which in the end fall into place – like the sun, the stars, and the moon in the poem – when the conscious and the unconscious have worked out an order between them.

In my mind the partial woman in the drawing speaks to Athena’s ousting of Medusa. Jumping as a grown woman in full armor out of Zeus’s head, Athena incarnates her father’s idea of the ideal daughter who aligns herself with patriarchy. Infuriated with Medusa for copulating with Poseidon (Zeus’s underside) in her temple, Athena put a curse on her and turned Medusa’s locks into venomous serpents and gave her a stare that literally petrified those with whom she had eye contact. – I note that the woman in the drawing in my dream has soft brown locks.

Medusa is la méduse (‘jellyfish’) that glows in the ocean, a creature that stings and burns, its round shape suggestive of the spiritual dimension and wholeness arrived at through pain and tribulations. Medusa is the bleeding vulva, her maidenhead lost to the Moon in the guise of the ocean god, a violator according to some, a lover by others’ accounts (you will note that in the poem quoted above the moon is masculine and the sun feminine, and so it is in Norse mythology and the Germanic languages). It depends on the cultural code whether menstruation is deemed to be a curse or a creative adventure. Medusa was a mortal who had a creative union with a god who personifies the treasurehouse of the unconscious. Her offspring by Poseidon was the winged Pegasus, symbol of poetic inspiration. Some say Pegasus sprang from the blood gushing from her neck at her beheading by the hero Perseus, whose hand was guided in the deed by Athena.

The lower, instinctual part of the woman’s body is left out in the drawing. The color of her dress, the deep green of the ocean, implies that she has not fully emerged in human form. What is not expressed gives free rein to the fantasy. In my imagination it could be an allusion to the fish tail of a mermaid, a suggestion that would seem to be supported by the next dream segment.

Cooking white fish in a red pot to me implies an alchemical process. The white fish I see as a reference to the submerged instinctual part of Medusa (mermaid) and simultaneously to the purity of her unadulterated instincts. I know that the watery pieces in my hand come from a frozen block (which I normally keep at hand in the freezer), suggesting a thaw. Cooking the fish in the red pot implies transformation from the white stage (albedo) to the red stage (rubedo) when life is lived consciously to the fullest, which is the goal of the Work. “The white becomes united with red through the raising of the heat of the fire (https://h2g2.com/edited_entry/A676370). In my dream the gas flame is burning under the pot. I am waiting for the water to boil before putting the fish in.

About the reddening it is said that “to make the opus come alive into a fully human mode of existence it must have ‘blood’”. (Same source as above.) A sacrifice is called for. The sacrifice of the innocent is a familar theme. The fish was a symbol for Christ and sacramental food in the Christian tradition, but the tradition of the sacred fish and its consummation as sacrificial food goes back to much earlier times. According to Louis Charbonneau-Lassay’s The Bestiary of Christ, goddesses like Ishtar and Astarte were sometimes represented as half woman, half fish, and he believes that the mermaids of later times may have derived their presentation from these goddesses.

The smallness of the pot, which I refrained from objecting to, might suggest that assimilation of the divine nature has to be done in small quantities (which seems in a sense to be reflected by the short segments of the dream). Or given that it was out of the ordinary to use this pot for fish, it may have served to pull my attention toward the red color. But given that the dream mirrors an act that is part of my daily life, I take its primary message to be an exhortation to see the sacred in my mundain everyday activities. To not just gobble up the fish to alleviate my hunger but to be aware that it has given up its life to sustain mine and to mentally link back to its, and my own – our common – sacred origins.

The fact that I note the pyjamas in which I am sleeping while dreaming and that I hold the fish in my hand, should have helped me become lucid, for ‘my hand’ is the sign supposed to alert me to the fact that I am dreaming. The dream thus emphasizes its message to wake-up and live everyday life in lucid awareness.

I am moulding dark hair into an elegant coiffure – giving form to mysterious thoughts that arise spontaneously from the unconscious, like the hair that grows naturally on the human head. I only see the head of hair, which I take to symbolize Medusa’s severed head that inspired such terror in man. I hold it tight to my bosom (heart), feeling fondness for it. I understand that embracing Medusa’s energy is a prerequisite for a genuine creative act. There has to be a harmonious relationship between Athena, goddess of reason, and Medusa of the chaotic dark depths.

Starting with segment 6 which came to me as the confirmation of a suspicion aroused by segment 5. A woman who is not in touch with her Medusa energy is prone to become the victim of an addiction. Medusa’s exile has left in the female soul an outcry for acceptance. Not knowing how to respond we resort to a pacifier to dull the pain caused by our helplessness. For my mother it was smoking, and so it is for my sister. For me it was therapy.

In segment 5 I reach for the phone. For years now, my therapy has been done over the phone. I have quit. The temptation to go back is there but reason (Athena!) has the better of me and I hold back. I have stopped before and gone back, numerous times, in my denial to look the fact in the eye (Owl) that therapy is not going help me find Medusa in me. It is an old fashioned phone which tells me that a new approach is called for. Ultimately, I believe that finding Medusa is a religious problem, religious in the sense of ‘linking back’ (religare), which goes beyond personal history. It is about woman’s creative relationship with the divine.

The initial scene in my dream implies that a new order needs to be implimented where Medusa will be given her rightful place, like the sun and the moon and the stars in the poem. When I googled marglytta (‘méduse’ in Icelandic) the other day, I saw it referred to as the “star of the ocean”. Given that our Planetary Dreaming is taking place at the winter solstice, I see this luminous star of the depths as the missing counterpart of the Bethlehem-star. This, in a nutshell, is what the clear-sighted Owl brought home to me in my dreams.

at the 2011 IASD annual conference,
held in the 12th century Rolduc Monastery in Kerkrade, the Netherlands

International Association for the Study of Dreams

During the night of 25-26 June, we were invited to take part in a telepathy contest. There was excitement in the air when the sender, Suzanne Wiltink, chose one of the four sealed brown envelopes held up to her by the organizers. Once retired to her room, Suzanne opened the envelope and concentrated on mentally transmitting the enclosed image to us dreamers. Our task was to make ourselves receptive in our dreams to messages sent out by Suzanne.

On the following morning each participant completed a dream report which requested a dream title, report of the dream(s), information concerning several of its key elements, and a guess about the nature of the target image. The forms were then deposited in a designated box.

On the morning of the 27th the four images were displayed, each on a separate cardboard box. Participants wrote their names on a form and deposited them in the box they believed displayed the target image which Suzanne had focused on.

Priestess – Female or Androgynous Divinity was the conclusion I drew from what I saw as the central message of my dreams. It was a magical moment. Adding to the enchantment was the image itself which corresponds to The Hierophant (‘Pope’ or ‘High Priest’) on traditional Tarot cards. I did not delay to order the beautiful deck which draws on Celtic heritage.

To emphasize the feeling of magic surrounding this event, my path was repeatedly crossed by a beautiful Ladybug, be it in my room or outside, in the romantic gardens at Rolduc!

And so I was granted an Honorable Mention in the contest, while the winners gave a more graphic description of the image.

All in all, this was a blissful experience which reassured me that I am an integral part of a greater and mysterious whole.